2015 - Looking Back and Watching the Future - By Rick Yost

One of the most common questions a realtor gets asked is "How is the market?"

It is truly a question that everyone is interested in. Most major news outlets will give you tons of broad based data about nationwide trends and historical data, but real estate is local. What is happening in The San Francisco market effects the California data and the nationwide data, but it doesn't really effect the Windham area data or market. So, the national numbers are a little difficult to relate to and not the most telling. With this in mind, I thought I would share some local numbers with you. These numbers are much more relevant to the Windham area market and what we can expect in the next twelve months.

The numbers include only properties listed on the multiple listing service. Some “For sale by owners” and properties transferred between friends and family members will not be included in these figures. These figures are as of 12/20/2015. In the same time frame in Windham and Raymond, there was a statistical irrelevant number of multi-family and mobile home type properties. The same is true of condos in Raymond. This is due to few of those types of properties existing in those towns. Windham had a fair amount of condo sales with 30 sold in 2014 and 32 sold through November of this year. Higher priced homes did well this year.

While the number of homes sold in a market is a good indicator of how the market is doing, it doesn't tell the whole story. The prices that those homes sell for and the number of days they take to sell is just as important.

These numbers tell us that the local market is pretty good. While home median home prices in Windham did not rise significantly, the number of days it took homes to sell fell. Raymond saw a significant drop in the days on market also. Please don't be fooled by Raymond's higher median list and sold prices compared to Windham. This does not reflect that similar homes in Raymond are more expensive than homes in Windham. It is a reflection of the higher number of low priced homes in the Windham market. Overall, the message that the numbers give is that well priced homes are selling well in the local market.

I believe that inventory will continue to be tight into 2016, prices will rise slightly, and interest rates will rise. I hope this information proves profitable for you in 2016.

Rick is a Realtor, real estate author, and long time Windham resident. You can reach Rick with all of your real estate questions and needs at rickyost@kw.com.
Posted by Michelle Libby at 10:48 PM No comments:


Everyone has their own opinions and factors as to whether they are motivated to buy or sell a home. In any event, here are four reasons why you may consider jumping into the housing market for 2016:

1.       Dirt cheap mortgage rates could disappear: While the mortgage rates have been bouncing around at the all time low rates for some time, the Federal Reserve has indicated they will begin to increase the interest rates soon. This means the window of opportunity is closing for those who have not jumped into the housing market.
2.
With rates expecting to go up gradually, this pushes up the borrowing costs and monthly mortgage payments which ultimately lowers how much money a buyer can borrow to purchase      a home . For buyers, the sooner you get qualified and make a purchase the better rate you will have!

3.       Home prices are projected to calm down: The supply of homes compared to the demand to purchase has made a tough market for buyers. We still continue to see pockets of multi-offer situations which can take a toll on the buyer. The good news is there has been a steady but safe increase in sales and prices consistently month after month. This will continue into the new year.
The more sellers that enter the market today will give the buyers that are waiting for the perfect home a better chance of pursuing their dreams of home ownership. If prices are rising safely and rates are still low, the sellers are happy and so are the buyers, it's a WIN-WIN for everyone.

4.  More homes to hit the market: If there is a slowdown in home prices, this will in-fact prompt more sellers to list their homes. As we have had a steady increase in sales and pricing, this will give the buyers more options to choose from, possibly leading to more multi-offer situations again!

5.  Rent prices are increasing: Rent prices have steadily increased throughout the year leaving little to no options available, which means it can actually be cheaper to buy than it is to rent. Additionally, there are many tax benefits to purchasing a home verses renting a home.


As I have said before, please call a local Realtor for all your real estate needs no matter how big or small. We are trained professionals here to make your life easier. It's best to surround yourself with the right team of professionals that can continuously give you the right advice for all your circumstances.

Lisa DiBiase is a broker/owner. She and her company represent buyers and sellers in the Greater Portland area. For all your real estate needs contact lisa@landinghomesmaine.com.

Posted by Michelle Libby at 4:30 PM No comments:

How to maximize your selling potential during winter - By Carrie Colby


Some say winter is the worst time to sell a home. Given the cold and stormy weather we have been experiencing, there are definitely challenges, but don’t be discouraged. First impressions and lasting impressions are key to progress potential buyers into active buyers. Be very wary as the slightest discomfort or issue can sour this experience and turn a buyer away from your home, but by addressing a few key areas, any winter woes can be easily avoided. 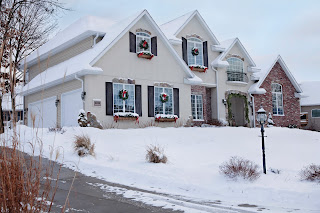 Here are a few simple tips to maximize the showing potential of your home during the winter months.
It’s storming or just post-storm, but you have showings booked for your home. (You must have motivated buyers to go out in that weather!) Don’t make it even more of a chore for them, be sure to shovel your drive or walkway so that the first impression is a clean and accessible entry. Buyers have been known to turn away, rather than hike to the doorway in knee deep snow and risk snow in their shoes, wet pants and wet socks.

Make sure the path to the lockbox is clear. If you are using a lockbox for real estate agents to enter your home, make sure they can get to it without tromping through the snow.

Clean gutters, and make sure there are no places ice dams can develop. You want to demonstrate to a prospective buyer that you are meticulous about maintenance and that spring won’t uncover surprise issues that require repairs.

Remember, buyers are usually viewing more than one home at a time, and thus traveling around and running in and out of cars or up and down elevators in condos. Typically they will be dressed for the great outdoors, so although having the heat way up is great for lounging on the couch, it can be oppressive for visiting buyers. Be sure to monitor the temperature of the entire house and set it appropriately.

The winter months also mean shorter days and less natural light. Be sure to have adequate lighting in every room. Dark rooms are depressing when coming in from the cold. Keep it bright in the winter. Some may object for energy saving reasons, but it is best to leave all the lights on before showings or use timers. This allows you to set the mood lighting, and saves the buyers fumbling for light switches.  Remember first impressions.  Is your home a sanctuary and oasis from the cold?

Be sure to prepare for those wet and snowy shoes and boots. No one likes having snow and dirt tracked around there home by shoes or wet socks, just as no one enjoys having wet socks and dodging puddles in the doorway.  Be sure to have a “Shoes Off” sign. Place an absorbent mat protecting your stone or wood flooring. Be sure to have a shoe tray or appropriate storage area for shoes, not only to avoid the puddles but to show off the organization of your home.  Apply this also to winter jackets, hats and scarves. Show functioning and organization by thoughtfully arranged set ups, don’t just have outerwear exploding out of closets or haphazardly hanging on hooks or coat racks.

Posted by Michelle Libby at 3:40 PM No comments:

The time to act is now! - By Matt Trudel


This past year has been an excellent market and all signs show to home values continuing to rise next year.  So if you are planning on buying in the next three to six months, the time to act is now.  It is a perfect time to put together a team of professionals to assist you in the process.  Find yourself a realtor, a loan officer, a title company, an inspector and an insurance agent.  This is the professional team you want to form and have everyone working together to save you time and money.


Perhaps you are thinking of waiting until next year so you can file your taxes and get a refund to assist in the closing cost or down payment.  That is not a reason to hold off your search.  Start looking now before we get buried in snow.  Financing can be held off until next year, and negotiation of that in the purchase and sale is very simple.  Many sellers are getting anxious because winter is upon us.  Sales slow down this time of year, which gives buyers an advantage in negotiating a better price and/or terms.

Inspectors can also do a more thorough inspection when there is not two or three feet of snow on the ground.  A roof is nearly impossible to inspect when covered in snow.  Septic inspections are much easier and sometimes cannot be located if there is too much snow.  That is why you want to try to make your move now and get the ball rolling.

On a side note for sellers who are keeping their property listed through the winter, you might want to consider having home inspections done now and provide them to your potential buyers.  This would also give you a list of things to consider fixing.

Closing on a home now, under the new lending regulations, makes the time frame 60 days or more from the time you place a home under contract.  So even if you put a home under contract next week, you would be looking at February for a closing date.  There are exceptions to this, and quicker closings are possible depending on the type of financing and the lending institution.

So get the ball rolling, put your team of professionals together, and start your search today.